Business intelligence and chart-building software have become ubiquitous at all levels of nearly every organization.  There isn’t an analysts out there who doesn’t have access to at least one piece of software that can build various chart types with a near endless array of formatting options; think Microsoft Excel.

However, it is important to understand that chart-building is merely one step in the process of effectively communicating data.  Most software on the market have made strides toward improving default settings, but the analyst still plays a role in exploring the data to uncover and then share the story in the data.  Let’s focus this discussion on going beyond default settings to share that story.

So, what can you do differently starting today to more effectively communicate the story in your data?  (Note, there are exceptions to each tip outlined here.)

Ditch the Vertical Bar Charts: Most languages are read left-to-right, not bottom-to-top

Reading left-to-right is natural for the vast majority of our audiences.  So, why not present our information in a manner that is intuitive to our audience?  Consider the two charts below.

These charts display the same information.  The argument in favor of horizontal bar charts is not that they are more accurate; accuracy is the minimum standard when sharing data.  The case for horizontal bars is that they reduce the cognitive load on your audience’s mind.

Other considerations with bar charts:

Limit the use of color: Use color to direct the audience’s attention, not to distinguish dimensions

I first learned about the iconic memory reading “Storytelling with Data” by Cole Nussbaumer Knaflic.  The iconic memory captures and filters information to be sent to the short-term memory.  Color is one of a number of preattentive attributes we can use to capture  the iconic memory’s attention.

We’ll want to avoid the urge to go over board with preattentive attributes, however, because the short-term memory can only hold about four pieces of information at a time.   If we ask the short-term memory to account for the meaning of four or more colors, we are essentially fully taxing our audience’s ability to interpret the actual data.

So, how should you approach color?  I like to start with grey and add blue where I intend to drew the audience’s attention.  Often, I’ll include a third color, but I never do so without good reason.  In fact, I scrutinize the need for each addition color added to my viz more so than I did the previous.

Here is an example of reducing color I’ve been using in some of my talks.  Note how the pie chart requires the use of numerous colors and a legend to distinguish the segments.  This is just one reason I don’t create pie charts. 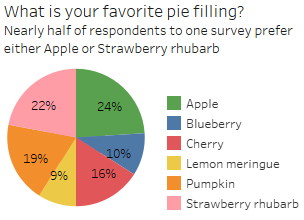 Other considerations for color:

Include Big Angry Numbers (BANs): What’s the one number your audience has to see?  Make it BIG!

Big numbers are eye catching; the research says so.  See Amy Alberts’s and Andy Cotgreave’s webinar: Eye Tracking: What it teaches us about dashboard design

So, how do we handle BANs?  Place the must see number in a prominent place where your audience can’t miss it.  For a single number, consider placing at the top left.  For a series for three or four numbers, either across the top or down the left side.  Combining color, proximity and BANs can go a long way toward delivering your message clearly.

Another example from some of my recent talks:

Hope this is helpful!  As always, thank you for reading!!! Find me on Twitter @RelatableData